It is unusual for me to choose back-to-back books in which I invoke the "100-page rule"; but alas, there are too many (far, far too many) great books waiting for me to waste my precious reading time.

"The Woman in Cabin 10" by Ruth Ware is the first one. This one hit the stands in a blaze of hype, promising to be the next "Gone Girl" or "The Girl on the Train", as many do these days. And for some, it was that good. For me, not so much. My review is here.

The next one was more of a surprise because it's been on my TBR for a while, and I have looked forward to reading it. "1Q84" by Haruki Murakami, originally written as three novellas in Murakami's native Japanese, was translated to English and combined into one novel. My review is here.

Posted by Carmen, Queen of Stone's Throw at 8:49 AM No comments: 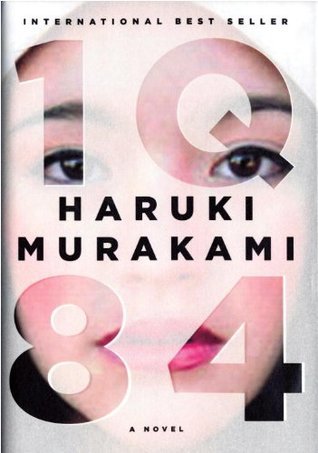 Summary:
A young woman named Aomame follows a taxi driver’s enigmatic suggestion and begins to notice puzzling discrepancies in the world around her. She has entered, she realizes, a parallel existence, which she calls 1Q84 —“Q is for ‘question mark.’ A world that bears a question.” Meanwhile, an aspiring writer named Tengo takes on a suspect ghostwriting project. He becomes so wrapped up with the work and its unusual author that, soon, his previously placid life begins to come unraveled.


My take: 2 looks
Even though I put this one down, I am giving it 2 looks because I did read to page 223 before deciding to abandon it. Interestingly enough, I asked fellow reader Sarah if she had read it, and she told me that she, too, put it down about 1/2 way through.

To pen a book that wraps it all up in the end is an intriguing method of writing, but it has to be interesting enough until you get to the solution in order to keep the reader. That is where this book failed me.

The characters were all very different, with developing pasts, and their trajectories were clearly going to intersect. However, none of the five primary characters had any hold on me. I was completely uninvested, but wanted so badly to like this one that I plowed through over 200 pages. Perhaps there was something lost in the translation from Japanese to English, and I was quite interested in the fact that one person translated the first two sections, with someone else translating the last section. I wanted to like the book enough to read it all and ruminate over any differences in style from the translators. However, it was not meant to be.

Not recommended.
Posted by Carmen, Queen of Stone's Throw at 8:41 AM No comments:

The Woman in Cabin 10 by Ruth Ware

Summary:
In this tightly wound story, Lo Blacklock, a journalist who writes for a travel magazine, has just been given the assignment of a lifetime: a week on a luxury cruise with only a handful of cabins. At first, Lo’s stay is nothing but pleasant: the cabins are plush, the dinner parties are sparkling, and the guests are elegant. But as the week wears on, frigid winds whip the deck, gray skies fall, and Lo witnesses what she can only describe as a nightmare: a woman being thrown overboard. The problem? All passengers remain accounted for—and so, the ship sails on as if nothing has happened, despite Lo’s desperate attempts to convey that something (or someone) has gone terribly, terribly wrong…

My take: 1 look
I put this one down after trying again and again to get "into" it. When there are excellent suspense novels ripe for the picking on the shelves of the local library, this one does not hold muster. I did a quick survey on social media when I found myself struggling with the book, and found that it is quite polarizing. People either love it or hate it. Well, count me as one of the latter.

Not recommended.
Posted by Carmen, Queen of Stone's Throw at 8:33 AM No comments: