Coming across my desk are two new ones!

I await two new review copies from authors I adore. I received confirmation yesterday and today that they are coming, one electronically and the other in hardcover (!). Ruth Jefferson is a labor and delivery nurse at a Connecticut hospital with more than twenty years’ experience. During her shift, Ruth begins a routine checkup on a newborn, only to be told a few minutes later that she’s been reassigned to another patient. The parents are white supremacists and don’t want Ruth, who is African American, to touch their child. The hospital complies with their request, but the next day, the baby goes into cardiac distress while Ruth is alone in the nursery. Does she obey orders or does she intervene?

Ruth hesitates before performing CPR and, as a result, is charged with a serious crime. Kennedy McQuarrie, a white public defender, takes her case but gives unexpected advice: Kennedy insists that mentioning race in the courtroom is not a winning strategy. Conflicted by Kennedy’s counsel, Ruth tries to keep life as normal as possible for her family—especially her teenage son—as the case becomes a media sensation. As the trial moves forward, Ruth and Kennedy must gain each other’s trust, and come to see that what they’ve been taught their whole lives about others—and themselves—might be wrong.

With incredible empathy, intelligence, and candor, Jodi Picoult tackles race, privilege, prejudice, justice, and compassion—and doesn’t offer easy answers. Small Great Things is a remarkable achievement from a writer at the top of her game.

You can read an excerpt here. "small great things" will be released October 11, 2016 by Ballantine Books.

The second, and the hardcover, is the latest by Herman Koch. I adored his "The Dinner", and can't wait to read "Dear Mr. M". This book was released yesterday.

Mr M is being watched. As a famous writer, he is no stranger to the limelight, although interest in his work has been dwindling of late. His print runs are smaller than they used to be, and so are the crowds at his bookshop signings. But there is someone still interested in Mr M and keeping an extremely close eye on him—someone whose own story bears more than a passing resemblance to the plot of Mr M’s bestselling thriller, in which a teacher has an affair with a student, only to be brutally murdered by the girl and her teenage boyfriend. In Mr M’s book, the body is never found—but in real life, bodies have an awkward habit of turning up.

Listen to or read an interview with Herman Koch about the book here.

Stay tuned for my reviews of these two!
Posted by Carmen, Queen of Stone's Throw at 11:33 AM 2 comments:

Email ThisBlogThis!Share to TwitterShare to FacebookShare to Pinterest
Labels: BloggingForBooks, NetGalley, Own, TBR

The Paper Menagerie and Other Stories by Ken Liu 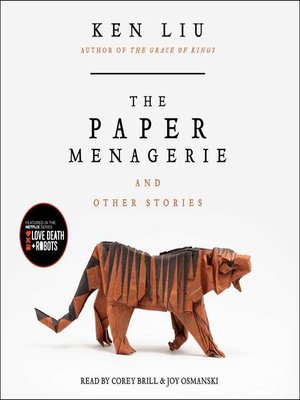 Summary:
With his debut novel, The Grace of Kings, taking the literary world by storm, Ken Liu now shares his finest short fiction in The Paper Menagerie. This mesmerizing collection features all of Ken’s award-winning and award-finalist stories, including: “The Man Who Ended History: A Documentary” (Finalist for the Hugo, Nebula, and Theodore Sturgeon Awards), “Mono No Aware” (Hugo Award winner), “The Waves” (Nebula Award finalist), “The Bookmaking Habits of Select Species” (Nebula and Sturgeon award finalists), “All the Flavors” (Nebula award finalist), “The Litigation Master and the Monkey King” (Nebula Award finalist), and the most awarded story in the genre’s history, “The Paper Menagerie” (The only story to win the Hugo, Nebula, and World Fantasy awards).

A must-have for every science fiction and fantasy fan, this beautiful book is an anthology to savor.

It took me a while to read this one because I had to pause at the end of each story, sometime for days, to think about it, mentally study it, and allow it to enter my memory stores where it wanted to reside. The stories are varied in length, are wide in range and subject, and are all unforgettable.

When I started with "The Bookmaking Habits of Select Species", I knew this would be unlike anything I'd read lately. And it just got better from there. A sly combination of history lesson, science fiction, revisionist history, and social commentary, Liu deserves every award and accolade he has received for this compilation, which are numerous.

I highly recommend this gem. Here are a few memorable quotes:
Thanks to NetGalley for an advanced copy of this book in exchange for my honest opinion.

Ella Minnow Pea is a girl living happily on the fictional island of Nollop off the coast of South Carolina. Nollop was named after Nevin Nollop, author of the immortal pangram, "The quick brown fox jumps over the lazy dog." Now Ella finds herself acting to save her friends, family, and fellow citizens from the encroaching totalitarianism of the island's Council, which has banned the use of certain letters of the alphabet as they fall from a memorial statue of Nevin Nollop. As the letters progressively drop from the statue they also disappear from the novel. The result is both a hilarious and moving story of one girl's fight for freedom of expression, as well as a linguistic tour de force sure to delight word lovers everywhere.

Loved the very idea of this book before I bought it. Very rarely do I want the physical book enough to seek it out (electronic copies are more my "immediate speed"), but I read this one with highlighter in hand, and will keep it on my shelf for re-reads.

But I get ahead of myself.

Written in epistolary form, for which I am a sucker, the fictional island of Nollop read amazingly like it was set in my own tiny community. The people are wonderfully real, cleverly written, and react in much the same way we all do: immediate compliance to rules, followed by a bit of questioning, followed by a concerted effort to change what we find disagreeable. Because of the story flow, I had to read the last several pages aloud to hear the phonetics of the words and understand the sentences. I loved the interactive nature of the end!

While this book is very witty and introduces words both real (rarely used, which I will have to look up later) and imagined (warning: I may now work some into my own lexicon), the very sly commentary on what we venerate struck a deep chord within me. In an very subtle style, Dunn makes profound observations on the corruption of power, blindly following rules, the view of an outsider looking in, and finally, the dissolution of status quo. And all in such an entertaining and engaging story. 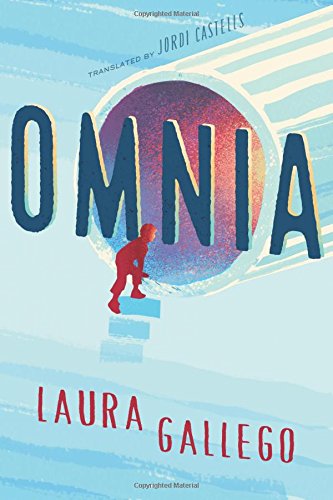 Where else but Omnia would a boy go looking to replace a one-of-a-kind stuffed bunny that happens to be his baby sister’s favorite toy? Scrolling through the online retailer’s extensive inventory, Nico finds what looks like a perfect match, but the item is lost somewhere in the vast Omnia warehouse. He doesn’t believe it, so he stows away in a shipment being returned to the warehouse to search for the bunny himself.

Nico quickly gets stranded on the island of Omnia, a fantastical place that does much more than sell everyday items. It is a hub for a business with intergalactic reach, and while stray visitors to Omnia are welcomed warmly, they are not permitted to leave, ever.

The adventure of a lifetime awaits Nico as he searches for the beloved toy and tries to find a way to return home.

Read in one sitting, this book brought smiles to my face over and over again.

Nico feels bad about inadvertently putting his sister's favorite stuffed animal, one from his mother's childhood, no less, in the pile for donation. When he searches for a replacement, there are none to be found. However, his friend Mei Ling reminds him of an Amazon-type site called Onnia, who boasts to have "Anything you could ever dream of."

Through a series of decisions, calculations, and tumbles, Nico finds himself in the middle of the Omnia world, with robots, aliens, new friends, odd items, and lots and lots of rules. It seems that Nico will never be able to find his way home, much less the bunny which started the adventure in the first place.

Told with such wit and cleverness, this is the perfect book to read aloud to upper-elementary or junior high students. A thoroughly delightful tale, this is highly recommended.

Thank you to NetGalley for a pre-release galley of this book in exchange for my honest review.
Posted by Carmen, Queen of Stone's Throw at 2:52 PM No comments: