With a fresh, authentic voice straight out of Texas, Britta Coleman has crafted a compelling, award-winning debut that carries readers with humor and heart. When fiery Amanda Thompson becomes engaged to the love of her life, Mark Reynolds, a talented man on a clear career path, she hopes for happily ever after. Except an error in judgment costs Mark his job at a big Houston church and their future is suddenly, irrevocably changed. A new opportunity in a small West Texas town moves the couple a full day's drive away from all that is familiar. Out of love for each other, and in spite of secret hurts and dashed expectations, Mark and Amanda settle in Potter Springs. With the help of the town's colorful citizens the displaced newlyweds undergo an emotional journey full of heartbreaking clashes and humorous mishaps that lead them to a heightened understanding of "ever after."

My take: 2.5 looks
It was a very fast book to read and was "okay" on the entertaining scale. I liked the mothers the best. It was predictable to the Nth degree and by the end, I couldn't wait for it to be over. I may read more by this author, but just to see if she has matured in her storytelling.
Posted by Carmen, Queen of Stone's Throw at 12:21 PM No comments: 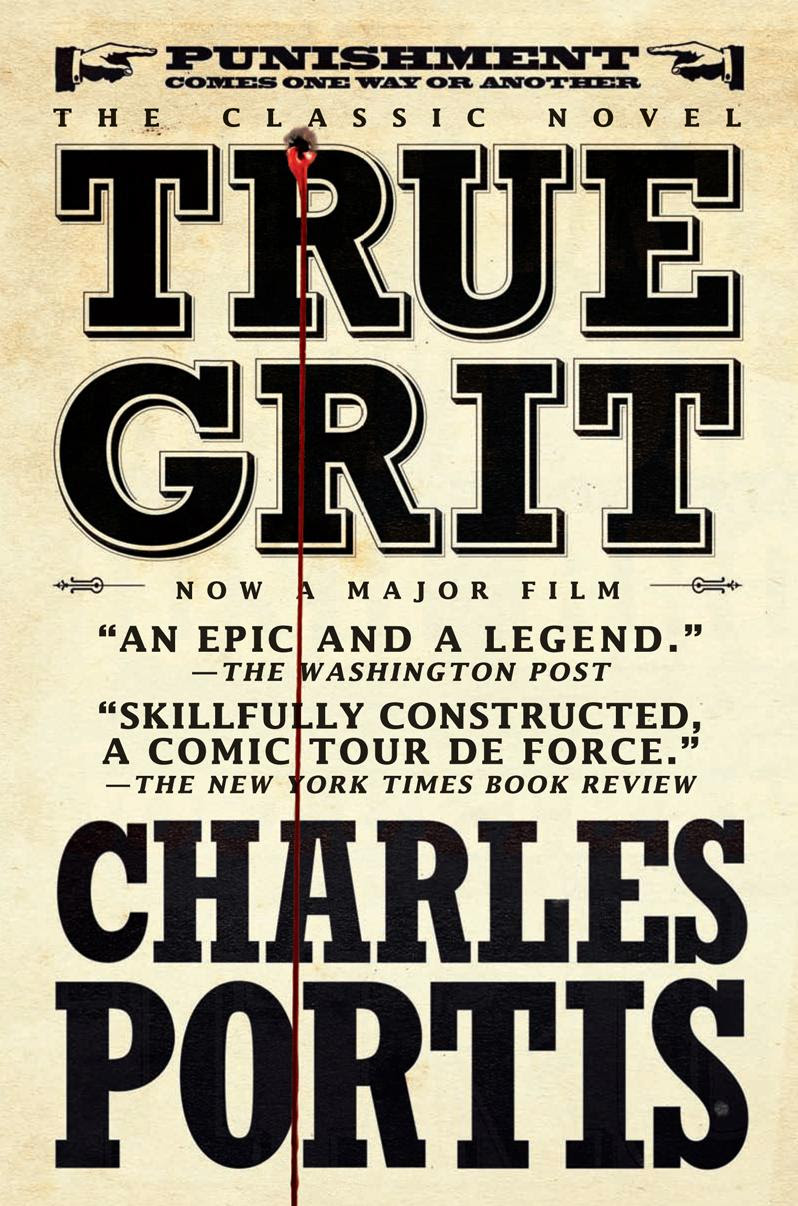 Charles Portis has been acclaimed as one of America’s foremost comic writers. True Grit is his most famous novel. First published in 1968, and the basis for the movie of the same name starring John Wayne (for which he won his only Academy Award), it tells the story of Mattie Ross, a fourteen-year-old girl from Dardanelle, Arkansas, who sets out in the winter of eighteen seventy-something to avenge the murder of her father. Since not even Mattie (who is no self-doubter) would ride into Indian Territory alone, she "convinces" one-eyed "Rooster" Cogburn, the meanest available U.S. Marshall, to tag along with her. As Mattie outdickers and outmaneuvers the hard-bitten types in her path, as her performance under fire makes them eat their words, her indestructible vitality and harsh innocence by turns amuse, horrify and touch the reader. What happens — to Mattie, to the gang of outlaws unfortunate enough to tangle with her — rings with the dramatic rightness of legend and the marvelous overtones, the continual surprises, of personality. True Grit is eccentric, cool, straight and unflinching, like Mattie herself, who tells the story a half-century later in a voice that sounds strong and sure enough to outlast us all.

My take: 4 looks
I am amazed at how close (at least the first) movie is to the book. I could almost follow along in the book while watching. Maybe this was because an actor, Hume Cronyn, wrote the screenplay. In any case, only the ending is a bit different.

The telling of the story by a woman who is recalling her 14th year makes for a good story. There is some reflection but not much, and there is not much internal monologue. With that said, this book is driven by dialogue. Witty, clever, revealing and character-building dialogue. There are one-liners here that would work on a comedy stage in current time, but at the same time reflecting the old west as it was: harsh, cruel and providing little time for emotional softness.

The story is a good one, but one that probably would not have read if it were not for the movie. However, I will read more by Portis.
Posted by Carmen, Queen of Stone's Throw at 9:49 AM No comments:

Decorated to Death by Dean James

Not everyone can claim both Hercule Poirot and Nancy Drew as inspiration - but not everyone is a vampire sleuth from the States who pulled up stakes to live in a small English village. Even the eccentric denizens of Snupperton Mumsley might be surprised by Simon Kirby-Jones's rather unusual lifestyle. But murder is a more than adequate distraction when a visiting celebrity meets his maker - and Simon must suss out a killer.

My take: 3 looks
This is a fun cozy mystery. Well, if you call an expatriate-murder-solving-homosexual-vampire a cozy mystery!

This tale was fun from beginning to end. In the vein (haha) of Sookie Stackhouse, it is light-hearted, enjoyable and ties up all loose ends by the last page. The writing was fresh, energetic, and intelligent. I love the use of words such as "harridan", "loquacious" and "fishwife". I will read more by this author!
Posted by Carmen, Queen of Stone's Throw at 7:03 PM No comments:

When an old Gypsy man curses Billy Halleck for sideswiping his daughter, six weeks later he's 93 pounds lighter. Now Billy is terrified. And desperate enough for one last gamble...that will lead him to a nightmare showdown with the forces of evil melting his flesh away.

My take: 3 looks
It's hard to not like a Stephen King (this time writing under the pseudonym Richard Bachman) book. Full of intrigue, mystery, violence, death and a huge dose of weirdness, this one does not disappoint.
Posted by Carmen, Queen of Stone's Throw at 2:52 PM No comments: 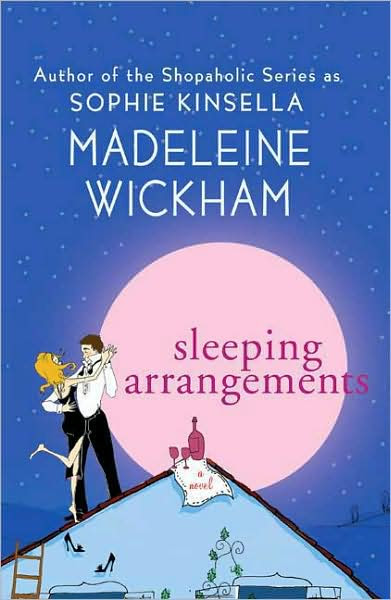 Chloe needs a holiday. She's sick of making wedding dresses, her partner Philip has troubles at work, and the whole family wants a break. Her wealthy friend Gerard has offered the loan of his luxury villa in Spain--perfect.

Hugh is not a happy man. His immaculate wife Amanda seems more interested in the granite for the new kitchen than in him, and he works so hard to pay for it, he barely has time for his children. Maybe he'll have a chance to bond with them on holiday. His old friend Gerard has lent them a luxury villa in Spain--perfect.

Both families arrive at the villa and get a shock--Gerard has double-booked. An uneasy week of sharing begins, and tensions soon mount in the soaring heat. But there's also a secret history between the families - and as tempers fray, an old passion begins to resurface ...

My take: 2.5 looks
It was a cute, easy read. I could have done without the infidelity because they "had to find out", the 16-year-old losing his virginity to the nanny while the mom turned her back, and the pot smoking ... but I won't be a prude on this one. I was glad it was happily-ever-after.

I have a few others by Sophie Kinsella on my list, and will read another one by her. After that, I'll decide whether or not she is an author worth keeping on my TBR.
Posted by Carmen, Queen of Stone's Throw at 9:59 AM No comments:

Their Eyes Were Watching God by Zora Neale Hurston 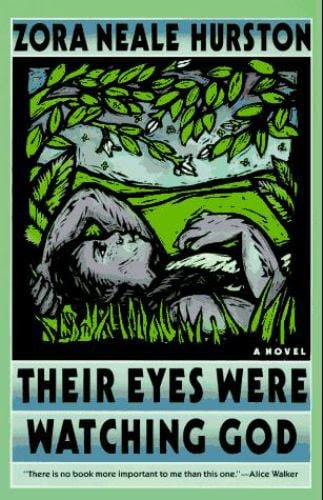 One of the most important works of twentieth-century American literature, Zora Neale Hurston’s beloved 1937 classic, Their Eyes Were Watching God, is an enduring Southern love story sparkling with wit, beauty, and heartfelt wisdom. Told in the captivating voice of a woman who refuses to live in sorrow, bitterness, fear, or foolish romantic dreams, it is the story of fair-skinned, fiercely independent Janie Crawford, and her evolving selfhood through three marriages and a life marked by poverty, trials, and purpose. A true literary wonder, Hurston's masterwork remains as relevant and affecting today as when it was first published— perhaps the most widely read and highly regarded novel in the entire canon of African American literature.

My take: 5 looks
This book is heralded as an "African American Feminist Classic", which put me off a bit. In the age of what came to be known as "racial uplifting" in literature, I didn't look forward to yet another story of the hardship, bitterness, plight and struggle of the American Negro. The book was panned because she didn't use her voice to try to advance the movement, and her fellow authors turned on her, as they thought she had turned on them.

However, this is a story that celebrates community, rural living, family and, most of all, a woman choosing her own path in a day when she was still considered the property of her husband. This strong-willed woman could have been any color, but her being black added to the story, as opposed to shaping or forming the foundation of the story.

The writing here is intelligent, lyrical and absolutely beautiful. It has insight, daring, courage and transports the reader in time. I was in the Everglades. I was on that store porch. I was in the big house. And I was on the dusty road, looking toward my next destination. Hurston was a writer...an author...and you should read this book simply because it is American literature at its finest.
Posted by Carmen, Queen of Stone's Throw at 7:37 AM No comments: