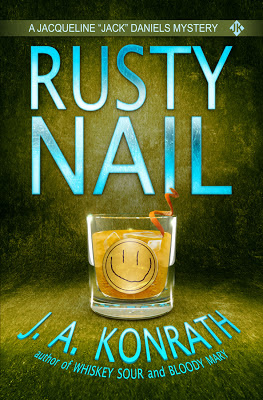 My take: 4 looks
J. A. Konrath knows how to write a fast-reading-story! I finished this one as quickly as the other two, and am already looking forward to the next one. What CSI, Criminal Minds and Law & Order: SVU did for gruesome murder mysteries on television, Konrath does on paper. He goes just to the edge with his descriptions and personas, then ties it up nicely with a very satisfying ending. If you love a good mystery that doesn't hold back on the darkest side of killers, wrapped in humor and made personal, this is the series for you.
Posted by Carmen, Queen of Stone's Throw at 4:02 PM No comments: 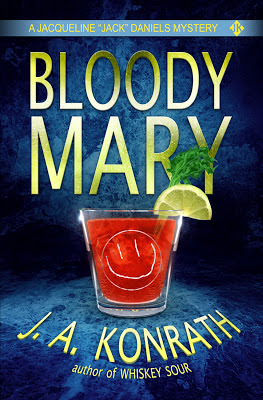 Summary:
Start with a tough but vulnerable Chicago cop. Stir in a psychopath with a unique mental condition that programs him to kill. Add a hyperactive cat, an ailing mother, a jealous boyfriend, a high-maintenance ex-husband, and a partner in the throes of a mid-life crisis. Mix with equal parts humor and suspense, and enjoy Bloody Mary – the second novel in the funny, frightening world of Lieutenant Jacqueline “Jack” Daniels.

When Jack receives a report of an excess of body parts appearing at the Cook County Morgue, she hopes it’s only a miscount. It’s not. Even worse, these extra limbs seem to be accessorized with Jack’s handcuffs.

Someone has plans for Jack. Very bad plans. Plans that involve everything and everyone that she cares about.
Jack must put her train wreck of a personal life on hold to catch an elusive, brilliant maniac---a maniac for whom getting caught is only the beginning…

My take: 4 looks
I read this fun ride of a book in one evening. Regardless of writing, storytelling or plot lines, that rates an automatic 4 looks in my mind. Like Lisa Lutz's series The Spellmans, this detective series is fun and entertaining. The bad guys in this series, however, are a little worse that the Spellman story lines. Regardless, it ends with satisfaction and made me turn immediately to the next in the series. There is no better recommendation than that!

Highly recommended.
Posted by Carmen, Queen of Stone's Throw at 11:26 AM No comments:

Summary:
New Bremen, Minnesota, 1961. The Twins were playing their debut season, ice-cold root beers were selling out at the soda counter of Halderson's Drugstore, and Hot Stuff comic books were a mainstay on every barbershop magazine rack. It was a time of innocence and hope for a country with a new, young president. But for thirteen-year-old Frank Drum it was a grim summer in which death visited frequently and assumed many forms. Accident. Nature. Suicide. Murder.

Frank begins the season preoccupied with the concerns of any teenage boy, but when tragedy unexpectedly strikes his family—which includes his Methodist minister father; his passionate, artistic mother; Juilliard-bound older sister; and wise-beyond-his-years kid brother—he finds himself thrust into an adult world full of secrets, lies, adultery, and betrayal, suddenly called upon to demonstrate a maturity and gumption beyond his years.

My take: 2.5 looks
This looked suspiciously like a Christian fiction book at first, but with the smattering of minor curse words, takes it out of the running for church libraries across the Bible-belt-south. It was a nice story, told from the perspective of the older brother, 40 years later. The action moves a little sluggish at times, and the reader is torn between a murder-mystery and a character study. I don't think the author ever figured it out, either.

With several (large) loose threads hanging, this felt like a book written in the infancy of an author's trade, however a look at Krueger's bio and you'll see that he has over 20 books spanning more than a decade. That info makes the book even more disappointing. The action pics up at the end, making the last 75 or so pages fly by, but it was simply mediocre. I can't recommend this one with so many better novels available.
Posted by Carmen, Queen of Stone's Throw at 11:17 AM No comments:

From the Barnes and Noble Blog:

Posted by Carmen, Queen of Stone's Throw at 7:57 AM No comments:

Trail of the Spellmans by Lisa Lutz 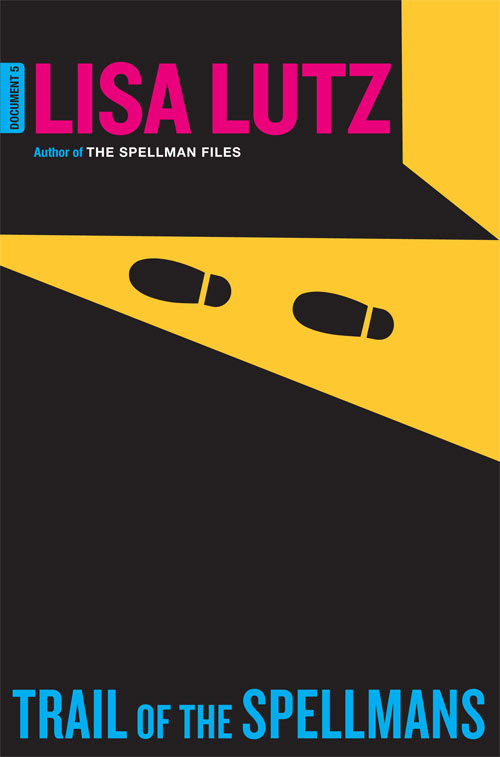 Summary:
For the first time in Spellman history, Isabel Spellman might be the most normal member of her family. Mom has taken on an outrageous assortment of extracurricular activities. Dad has a secret. Her brother and sister are at war, but neither will reveal the source of the conflict. While domestic disturbances abound, there is one source of sanity in the Spellman household: Demetrius Merriweather, employee of the month for eighteen months straight.

Things aren’t any simpler on the business side of Spellman Investigations. First, Rae is hired to follow a girl, only to fake the surveillance reports. Then a socialite has Isabel tail her husband, despite a conspicuous lack of suspicion. A man in a sweater vest hires the Spellmans to follow his sister, who turns out to be the socialite. Izzy won’t stop hunting for the answers—even when they threaten to shatter both the business and the family.

My take: 4 looks
I love these books! Lutz writes with such wit and smarts that I find them a pleasure to read. The characters are richly drawn and grow in each book in the series.

This is the 5th book in the Spellmans Series, and one of the best. There is so much going on, but it causes no confusion. By this time, the reader is familiar with the characters and their individual idiosyncrasies...the storyline flows nicely and rapidly and propels this family forward just like real life.

I highly recommend the entire series, with this being one of the best. But read them in order, so you get the maximum effect.

Posted by Carmen, Queen of Stone's Throw at 8:15 AM No comments: 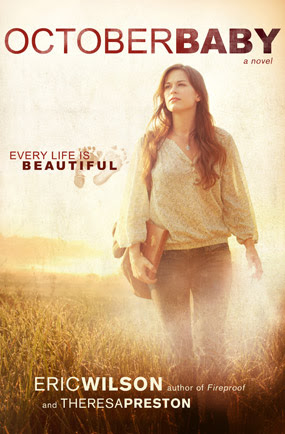 Summary:
"You saw me before I was born." Psalm 139:16 (NLT) As the curtain rises, Hannah hesitantly steps onto the stage for her theatrical debut in college. Yet before she can utter her first lines, Hannah—unscripted—collapses in front of the stunned audience. After countless medical tests, all signs point to one underlying factor: Hannah's difficult birth. This revelation is nothing compared to what she then learns from her parents: she was actually adopted … after a failed abortion attempt. Bewildered, angered, and confused, Hannah turns for support to Jason, her oldest friend. Encouraged by his adventurous spirit, Hannah joins his group of friends on a Spring Break road trip, embarking on a journey to discover her hidden past … and find hope for her unknown future. In the midst of her incredible journey, Hannah finds that life can be so much more than what you have planned.

My take: 1 look
Hannah is in college, finds out that she is adopted and completely freaks out on the only parents she has ever known, leaving them in her dust to find the woman who tried to abort her and get some answers.

This is the reason I don't enjoy Christian fiction. It's forced, smaltzy, and lame. The main character is so irritating and whiney and self-righteous that I couldn't swallow any of it. The adoptive father is over-the-top protective, prying and suffocating to his daughter. She's an adult, for goodness sakes! This book is written on, I would guess, a sixth grade level. So, if you are a 12-17 year old girl, enjoy.

All said, I didn't finish this one and do not recommend it.
Posted by Carmen, Queen of Stone's Throw at 8:08 AM No comments: 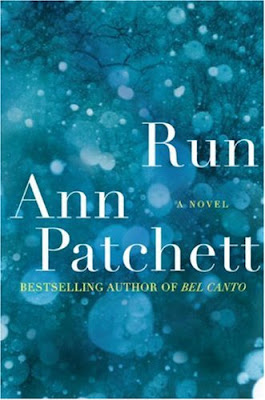 Sunmmary:
Since their mother's death, Tip and Teddy Doyle have been raised by their loving, possessive, and ambitious father. As the former mayor of Boston, Bernard Doyle wants to see his sons in politics, a dream the boys have never shared. But when an argument in a blinding New England snowstorm inadvertently causes an accident that involves a stranger and her child, all Bernard Doyle cares about is his ability to keep his children—all his children—safe.

Set over a period of twenty-four hours, Run takes us from the Museum of Comparative Zoology at Harvard to a home for retired Catholic priests in downtown Boston. It shows us how worlds of privilege and poverty can coexist only blocks apart from each other, and how family can include people you've never even met.

My take: 2 looks
This book left me very flat. I am a steadfast fan of Patchett and her beautiful, fluid writing style, but this story was completely unbelievable to me.

The adoption of two boys, the mother who never truly leaves them, the older brother with issues, the father who is good and yet vacant, and the young girl who runs like the wind. Too, too much going on here for one 24-hour period. Introductions to all, but no meat to any of it.

Sullivan: What is the story on the Sullivan's stealing? What truly motivated him and how was he caught? How does he feel now? What is the sarcasm hiding, deep in his psyche?

Teddy and Tip: They seem very well adjusted for two black boys adopted by the Irish family who turns out to be Boston royalty. And that sea-change at the end, only to go back again. Really? Are they that selfish?

Tennessee and Kenya: Is it just me, or do these names reek of what Spike Lee would call "coonery"?

The statue: We are introduced to a family dispute at the beginning to have it go nowhere. And the statue's ownership at the end surely must have caused some controversy...nothing.

So much more could have been done with this 24-hour period. Instead of taking on all characters and painting a thin layer of each, I would have preferred a more compact story with greater detail. However, if you've seen Patchett interviewed about her books, you know enough to not criticize or ask for more detail without extracting some venom.

If you like Patchett, read this so you will have her entire repertoire, but don't expect another Bel Canto.
Posted by Carmen, Queen of Stone's Throw at 11:17 AM No comments: