The Woman Who Knew Gandhi by Keith Heller 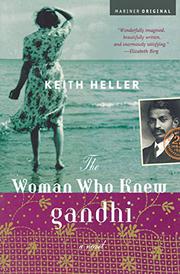 Summary:
Based on an aside in Mahatma Gandhi's autobiography, in which he mentions a brief but seductive youthful flirtation with an Englishwoman, The Woman Who Knew Gandhi boldly imagines a long correspondence between a spiritual leader from the East and an ordinary woman from the West.

In 1948, just after Gandhi's assassination, Martha Houghton receives a letter from Gandhi's son, who himself lies dying of tuberculosis in Bombay. Having found a stash of her letters to his father, he asks to meet her. The request sends Martha into a tailspin, for her husband knows nothing of her lifelong friendship with Gandhi. Martha and her husband are forced to reevaluate their long marriage, and she must find a way to reconcile the disparate halves of her life. Moreover, their small community becomes a magnet for the press, and Martha finds her words twisted and used against her. Ultimately, she must decide whether to meet her old son's friend on his deathbed, or to remain in England and mend the rift in her marriage.

My take: 4 looks
I love accounts like this! One of my favorite books, That Same Flower by Jostein Gaarder, builds on a relationship St. Augustine had before he renounced sensual love. While all of Heller's book is pure speculation, it is told in such a realistic way that the reader is immediately brought into the fantasy.

The book focuses less on Martha's time with Gandhi and more on how his assassination affects her, then the revelation to her husband of her years of friendship with this famous man of peace. Martha receives a letter from Gandhi's son and she is forced to confront what she has hidden for decades. This throws Martha and her husband into a state of reflection, her on the life she could have had; and him wondering how he could have lived this long with his wife and known nothing of his wife's friendship.

Once the news media gets wind of the relationship, they do what the media normally does, distorts the truth until it is unrecognizable. This affects Martha and her family, but that storyline is very secondary to the emotions that each character in the book feels. In the climax, Martha travels to India to confront Gandhi's son on his deathbed.

This book was extremely interesting and I would recommend it.

Posted by Carmen, Queen of Stone's Throw at 6:52 PM