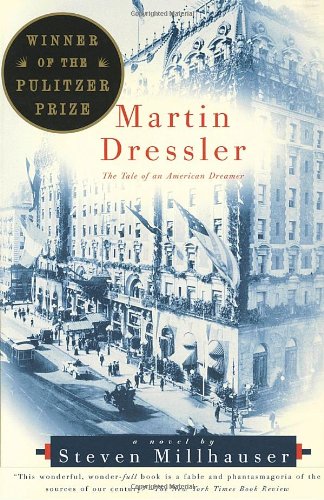 Young Martin Dressler begins his career as an industrious helper in his father's cigar store. In the course of his restless young manhood, he makes a swift and eventful rise to the top, accompanied by two sisters--one a dreamlike shadow, the other a worldly business partner. As the eponymous Martin's vision becomes bolder and bolder he walks a haunted line between fantasy and reality, madness and ambition, art and industry, a sense of doom builds piece-by-hypnotic piece until this mesmerizing journey into the heart of an American dreamer reaches its bitter-sweet conclusion.

Continuing with my plan to read Pulitzer winners for fiction, Martin Dressler: The Tale of an American Dreamer won the coveted prize in 1997. While easy to read, I found the abundance of description a bit sluggish. Detail upon detail of shops, buildings, furnishings, clothing, weather, etc., to the exclusion of descriptions of the people themselves. Martin's building plans were clearer to the reader than his feelings.

An odd man, for sure, Dressler was clearly driven to create bigger and better. He constantly desired more, and became bored once his current exercise was successful. As a matter of fact, the more the story progressed, the more maniacal he became. At the end of the book, his temperament is very bipolar: And indeed he was tired, so tired that he could barely lift his head, though at the same time he felt intensely alert (p 288).

I am not at all sure what Millhauser intended to convey with Martin's relationships. The relationship in the beginning between Martin and his father seems very strong, only to all but disappear, being referred to less and less as Martin having dinner with them over the cigar shop. Once Martin begins to see success, he looks only forward, forgetting those who helped him get to his position, as well as various female relationships.

However, in that vein, The three Vernon women introduced about 1/2 through the book seemed to monopolize and overtake the story. Caroline was odd, manipulative, selfish, and I detected a potential leaning toward lesbianism; Emmeline was intriguing and strong in the beginning, but completely collapses and acquiesces to her sister at the end in a shockingly fast and complete manner; and, Margaret, the mother of these two, was oddly passive-aggressive. The relationships they each formed with Martin were all a bit unusual, but the behavior of Caroline was particularly confusing, bordering on unrealistic. She elicited no sympathy from me, and by the time her antics reached a climax, Martin had rubbed away all of my sympathy, as well. It was almost as if they deserved one another.

The writing toward the end of the book became a bit rushed, and hasty. Once Martin saw success in his cafeteria endeavors, he quickly progressed to hotel magnate, and seemed to burned out quickly from there. The build-up in the beginning, Martin's success, then his quick descent reminded me very much like a rollercoaster. Where I would have liked more of a bell curve, the wrap up of the story was a bit forced and left me wanting.

Overall, this is yet another Pulitzer Fiction winner which has left me disappointed.

Not recommended.
Posted by Carmen, Queen of Stone's Throw at 9:20 AM

Email ThisBlogThis!Share to TwitterShare to FacebookShare to Pinterest
Labels: 2 stars, Own, Pulitzer, Review