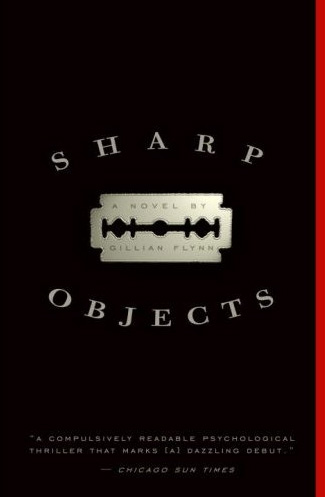 WICKED above her hipbone, GIRL across her heart Words are like a road map to reporter Camille Preaker’s troubled past. Fresh from a brief stay at a psych hospital, Camille’s first assignment from the second-rate daily paper where she works brings her reluctantly back to her hometown to cover the murders of two preteen girls. NASTY on her kneecap, BABYDOLL on her leg Since she left town eight years ago, Camille has hardly spoken to her neurotic, hypochondriac mother or to the half-sister she barely knows: a beautiful thirteen-year-old with an eerie grip on the town. Now, installed again in her family’s Victorian mansion, Camille is haunted by the childhood tragedy she has spent her whole life trying to cut from her memory. HARMFUL on her wrist, WHORE on her ankle

As Camille works to uncover the truth about these violent crimes, she finds herself identifying with the young victims—a bit too strongly. Clues keep leading to dead ends, forcing Camille to unravel the psychological puzzle of her own past to get at the story. Dogged by her own demons, Camille will have to confront what happened to her years before if she wants to survive this homecoming. With its taut, crafted writing, Sharp Objects is addictive, haunting, and unforgettable.

My take: 1.5 looks
I can't give this one one look because I didn't hate it, or even have trouble finishing it. At the same time, it doesn't quite deserve two looks. It was so over-the-top that it was completely unbelievable and even became somewhat amusing. The characters were completely overdrawn and lacked sympathy of any kind.

Camille was supposed to be an adult, but her childhood seemed to have stunted her so greatly that she never matured past about 13 years old. No, I don't believe that. She had trauma and a mother who was vacuous, yes, but nothing to cause the level of complete and idiotic behavior displayed in the story. The cutting, drinking, sexual promiscuity and drug use with her teenaged sister would have been plausible if taken alone, but the pervasive use of all was overblown, exaggerated and too much.

Amma was another badly drawn player in the story. A thirteen year old girl with the mean streak of an adult and a full blown psychotic nature with an unending supply of illegal drugs. I don't believe for a second that girls from normal families would follow her behavior or example, regardless of the small size of their town. Her cries for help seemed real, but the author used them instead to underline the psychosis instead of adding another layer and making Amma more complex.

Finally, Adora and Alan rounded out the ridiculous characters in this ill-fated novel. Each on both sides of the spectrum regarding personality, written to the hilt. Again, completely unbelievable, without depth and verging on being caricatures. The Munchausen by Proxy was obvious from the beginning, as was the identity of the killer. To have not figured this one out by page 50 would truly be an insult.

Away from the flawed characters, the writing was terrible. It read maddeningly in one-liners, like it was written by Sergeant Joe Friday of Dragnet fame. The start and stop of the lines caused readers' whiplash and ensured there was no flow whatsoever to the telling of the story. A reader could almost hyperventilate if reading this one aloud.

I was impressed by the comment from Stephen King on the back cover of the novel, extolling the smart writing and sharp insights of the book. I can only assume the publisher found a person somewhere who shares the famous name and was willing to give a quote.

Not recommended.
Posted by Carmen, Queen of Stone's Throw at 9:23 AM