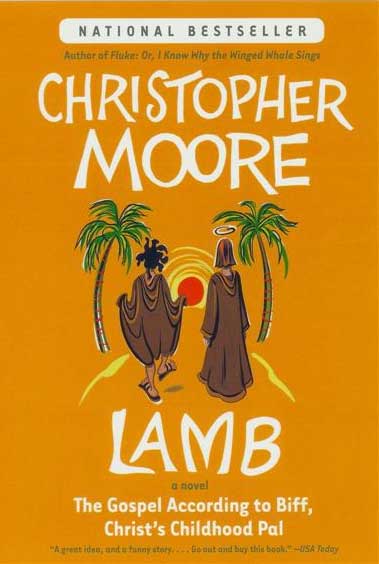 The birth of Jesus has been well chronicled, as have his glorious teachings, acts, and divine sacrifice after his thirtieth birthday. But no one knows about the early life of the Son of God, the missing years -- except Biff, the Messiah's best bud, who has been resurrected to tell the story in the divinely hilarious yet heartfelt work "reminiscent of Vonnegut and Douglas Adams" ( Philadelphia Inquirer ).

Verily, the story Biff has to tell is a miraculous one, filled with remarkable journeys, magic, healings, kung fu, corpse reanimations, demons, and hot babes. Even the considerable wiles and devotion of the Savior's pal may not be enough to divert Joshua from his tragic destiny. But there's no one who loves Josh more -- except maybe "Maggie," Mary of Magdala -- and Biff isn't about to let his extraordinary pal suffer and ascend without a fight.

My take: 3 looks
Christopher Moore is called an "absurdist author" and I certainly agree. This is the second book by him that I have read (the first was Fluke).

First to say, as a Christian, I had initial reservations about reading this book. However, curiosity got the better of me, and I was pleasantly surprised. It is not a commentary on the life of Jesus and I did not find it blasphemous. It was definitely irreverent, but I suspect all satirical, absurdist and dark humor is absolutely irreverent. This is fiction, and a fictional account of a boy who happens to be the Messiah with a best friend who is a boy through-and-through.

The writing here is witty and extremely clever. The greater your knowledge of the Christian Bible, the more you will chuckle. I enjoyed the back-and-forth in time where Biff is with Jesus, and where he is in modern day, writing this new gospel, under the sentry angel Raziel. I understand that there are a few character crossovers in other books and this one, making me want to read them, as well.