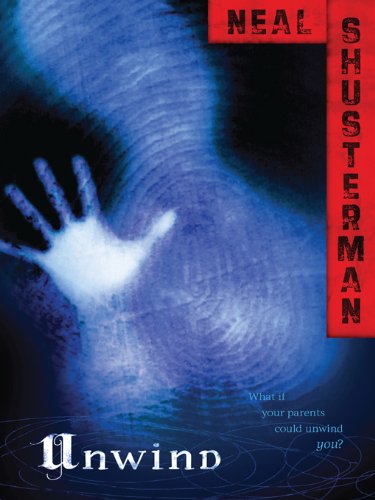 In a society where unwanted teens are salvaged for their body parts, three runaways fight the system that would "unwind" them. Connor's parents want to be rid of him because he's a troublemaker. Risa has no parents and is being unwound to cut orphanage costs. Lev's unwinding has been planned since his birth, as part of his family's strict religion.

Brought together by chance, and kept together by desperation, these three unlikely companions make a harrowing cross-country journey, knowing their lives hang in the balance. If they can survive until their eighteenth birthday, they can't be harmed—but when every piece of them, from their hands to their hearts, are wanted by a world gone mad, eighteen seems far, far away.

My take: 3 looks
While reading this one, I had the sneaking suspicion that I had read it before. I knew I had not, but that gives you an idea as to my impression of the originality of the story. After reading "Matched" Ally Condie, "Ender's Game" by Orson Scott Card, The Hunger Games trilogy by Suzanne Collins, Uglies by Scott Westerfield and the The Giver quartet by Lois Lowry, I really have read it all. There is just so much you can do with a coming-of-age-in-a-dystopian-society story that is new and fresh.

Then I got to the last 1/3 of the book. That's what set this one apart, and gave it 3 looks instead of anything lower. I actually got queasy during the unwind. I was intrigued by the clappers. I loved that Connor benefited from the very system to which he was opposed. While this didn't make me question my thoughts on when life begins, the sanctity of life or the price on convenience and being "whole", it was a great read and pointed me directly to the next book in the series. Thank goodness I already had it!

Recommended.
Posted by Carmen, Queen of Stone's Throw at 10:14 AM