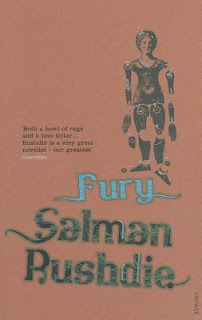 Malik Solanka, historian of ideas and world-famous dollmaker, steps out of his life one day, abandons his family in London without a word of explanation, and flees for New York. There's a fury within him, and he fears he has become dangerous to those he loves. He arrives in New York at a time of unprecedented plenty, in the highest hour of America's wealth and power, seeking to "erase" himself. But fury is all around him. Fury is a work of explosive energy, at once a pitiless and pitch-black comedy, a profoundly disturbing inquiry into the darkest side of human nature, and a love story of mesmerizing force. It is also an astonishing portrait of New York. Not since the Bombay of Midnight's Children have a time and place been so intensely and accurately captured in a novel.

My take: Not finished

I am putting this one down. I have vacillated between finishing/not finishing long enough, and reached my decision this morning.

Why put it down? Because it's an exhausting read. It's the non-stop self-pitying rant of an extremely wealthy man who can't find happiness. A man who abandons his wife and son (after thinking seriously of murdering the former) in London for the fury of New York. In a nutshell, he wants the fury of New York to overpower the fury he feels within himself.

What I suspect is a thinly veiled autobiography (and you know how I hate those, Holden Caulfield), Fury is full of beautiful writing and wonderful quotes for publishers about the excess of America. However, it descends quickly into whining. Beautifully written, irrepressible whining.

It is not very popular to dislike Rushdie's writing. People think of him as so esoteric, on a different plane, writing at a higher level than most. Perhaps his vocabulary is larger than the average fiction reader, but that only serves to give his writing a sense of arrogance. I can imagine him writing and thinking, "No one understands me. No one will "get" this."

This was the first Rushdie book I have tried, and I will more than likely try another one. After all, perhaps some of his earlier writing, before he was jaded by wealth and beautiful women half his age, will prove to be a bit more accessible for us common folk.

Not recommended.
Posted by Carmen, Queen of Stone's Throw at 9:56 AM