Revenge of the Spellmans by Lisa Lutz 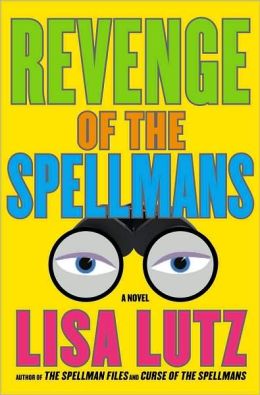 Summary:
Private investigator Isabel Spellman is back on the case and back on the couch -- in court-ordered therapy after getting a little too close to her previous subject. As the book opens, Izzy is on hiatus from Spellman Inc. But when her boss, Milo, simultaneously cuts her bartending hours and introduces her to a "friend" looking for a private eye, Izzy reluctantly finds herself with a new client. She assures herself that the case -- a suspicious husband who wants his wife tailed -- will be short and sweet, and will involve nothing more than the most boring of PI rituals: surveillance. But with each passing hour, Izzy finds herself with more questions than hard evidence.

Meanwhile, Spellmania continues. Izzy's brother, David, the family's most upright member, has adopted an uncharacteristically unkempt appearance and attitude toward work, life, and Izzy. And their wayward youngest sister, Rae, a historic academic underachiever, aces the PSATs and subsequently offends her study partner and object of obsession, Detective Henry Stone, to the point of excommunication. The only unsurprising behavior comes from her parents, whose visits to Milo's bar amount to thinly veiled surveillance and artful attempts (read: blackmail) at getting Izzy to return to the Spellman Inc. fold. As the case of the wayward wife continues to vex her, Izzy's personal life -- and mental health -- seem to be disintegrating. Facing a housing crisis, she can't sleep, she can't remember where she parked her car, and, despite her shrinks' persistence, she can't seem to break through in her appointments. She certainly can't explain why she forgets dates with her lawyer's grandson, or fails to interpret the come-ons issued in an Irish brogue by Milo's new bartender. Nor can she explain exactly how she feels about Detective Henry Stone and his plans to move in with his new Assistant DA girlfriend... Filled with the signature side-splitting Spellman antics, Revenge of the Spellmans is an ingenious, hilarious, and disarmingly tender installment in the Spellman series.

My take: 4 looks
The third book in The Spellman Files, this did not disappoint. Book two fell flat for me, as Izzy's antics were less humorous and more obsessive and irritating. Revenge of the Spellmans gets back on track, with hilarious quips and comebacks, matched with unusual (but plausible) situations. The introduction of Maggie is a nice one and the back-seat of Petra is welcome (I didn't haven't forgiven her for book two). Izzy and Henry's tensions break through the ice a bit, in a way that serves to move the dynamics of their relationship forward. Rae is growing up nicely, and the tension of Olivia as she nears empty-next is evident. All-in-all, these are real characters and I am enjoying them immensely.

Highly recommended.
Posted by Carmen, Queen of Stone's Throw at 7:53 AM