Banned Books Week: This will make you laugh 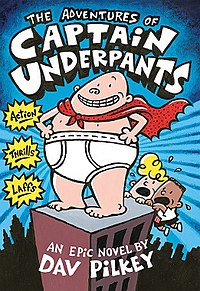 No, I am not somehow mistaken. As a matter of fact, this was the most challenged book for two consecutive years, 2012 & 2013.

In 2013 alone, there were 307 attempts to remove or restrict books from school curricula and libraries. And that's just the reported challenges. The ALA estimates that there are 5 actual challenges for every one made formal. And in 2012, Captain Underpants beat out 50 Shades of Grey! Go figure...

The author's response is wonderful:


LOVE this response! Do me a favor, and buy the first book in the series of Captain Underpants, just to add to your collection!
Posted by Carmen, Queen of Stone's Throw at 1:00 AM