The Girl who Kicked the Hornet's Nest by Stieg Larsson 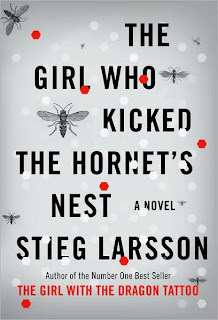 Summary: The exhilarating conclusion to bestseller Larsson's Millennium trilogy (after The Girl Who Played with Fire) finds Lisbeth Salander, the brilliant computer hacker who was shot in the head in the final pages of Fire, alive, though still the prime suspect in three murders in Stockholm. While she convalesces under armed guard, journalist Mikael Blomkvist works to unravel the decades-old coverup surrounding the man who shot Salander: her father, Alexander Zalachenko, a Soviet intelligence defector and longtime secret asset to Säpo, Sweden's security police. Estranged throughout Fire, Blomkvist and Salander communicate primarily online, but their lack of physical interaction in no way diminishes the intensity of their unconventional relationship.

WOW! This was by far the best book of this trilogy! After the intensity of the first two books, I took a break from reading the third, even though I already had it on my Nook. What a mistake! I saw a coworker of mine with the book and it sparked my interest again. A phenomenal finish to the story of Lisbeth Salander and the team of people we have grown to like and respect over the course of the novels. This was, by far, the best series of books I have read in a long, long time. What a crime thriller ought to be, beginning to end.

It is too bad that Larsson died before the publishing and subsequent wild popularity of the series. He had a heart attack after climbing seven flights of stairs to his office because the elevator was out of order. What a crappy way to go! His writing will be sorely missed. He would have become one of the greats of crime/thriller/fiction.
Posted by Carmen, Queen of Stone's Throw at 8:30 AM