The Peculiar by Stefan Bachmann 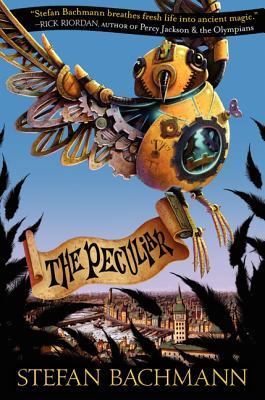 In the faery slums of Bath, Bartholomew Kettle and his sister Hettie live by these words. Bartholomew and Hettie are changelings—Peculiars—and neither faeries nor humans want anything to do with them.

One day a mysterious lady in a plum-colored dress comes gliding down Old Crow Alley. Bartholomew watches her through his window. Who is she? What does she want? And when Bartholomew witnesses the lady whisking away, in a whirling ring of feathers, the boy who lives across the alley—Bartholomew forgets the rules and gets himself noticed.

First he's noticed by the lady in plum herself, then by something darkly magical and mysterious, by Jack Box and the Raggedy Man, by the powerful Mr. Lickerish . . . and by Arthur Jelliby, a young man trying to slip through the world unnoticed, too, and who, against all odds, offers Bartholomew friendship and a way to belong.

My take: 2 looks
Maybe I wasn't in the mood for steampunk fantasy, but this book was very unsatisfying for me. I found myself skimming quite a bit, and if it were not a mere 265 pages, I would have put this one down. In my opinion, the characters were not properly set up. This seemed to be the second book in a series, making me feel like I had started the book in the middle. I had no sympathy for the protagonist and no disdain for the antagonist.

I would have liked more of a day-to-day life description of the characters before they were thrust into action. While the preface was nice in that it described the faery world coming to England, I didn't get a good feel for the reason, the changes, or the new life with these creatures. What was so wrong with changelings? Was the author trying to make a commentary on a section of humanity in their story?

In the end, I was glad it was over, was completely unsatisfied in the finish, will not read more and cannot recommend.
Posted by Carmen, Queen of Stone's Throw at 10:19 AM

Email ThisBlogThis!Share to TwitterShare to FacebookShare to Pinterest
Labels: 2 stars, Own, Review, YA