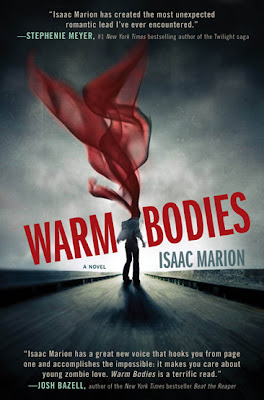 R is a young man with an existential crisis--he is a zombie. He shuffles through an America destroyed by war, social collapse, and the mindless hunger of his undead comrades, but he craves something more than blood and brains. He can speak just a few grunted syllables, but his inner life is deep, full of wonder and longing. He has no memories, no identity, and no pulse, but he has dreams.

After experiencing a teenage boy's memories while consuming his brain, R makes an unexpected choice that begins a tense, awkward, and strangely sweet relationship with the victim's human girlfriend. Julie is a blast of color in the otherwise dreary and gray landscape that surrounds R. His decision to protect her will transform not only R, but his fellow Dead, and perhaps their whole lifeless world.

My take: 3 looks
This was a fun and quick book to read. While it was gross (I don't think I could see the movie - yuck!), there was so much humor that zombies eating brains seemed almost funny. The first line sets the stage perfectly: "I am dead, but it's not so bad. I've learned to live with it." haha! Another one of my faves: "The scene as Julie and I make our way out of the airport resembles either a wedding procession or a buffet line."

There were only a few things I didn't like. I felt like the use of the f-bomb was a bit forced and sophomoric. Maybe people talk like this when humanity is declining, but I just don't see it. It made it seem more contrived that it should have. Almost like something a rookie author would do to try to add edge. As if the subject didn't already bring with it enough edginess. The story and dialogue would have suffered nothing without the overuse of this expletive.

The other part of the story which left me flat was the Boneys. Were they older zombies or another strain of undead? What sustained them, since it seemed that when the zombies started to change, their existence was compromised. What was this way they had of communicating so that R could understand them? Could all zombies understand them, or just R because he seemed to be the impetus of the change? The story of the Boneys could have added another dimension to the story without taking away from the core, I think.

I think a sequel is in order!

Recommended.
Posted by Carmen, Queen of Stone's Throw at 11:29 AM