I Am the Messenger by Markus Zusak 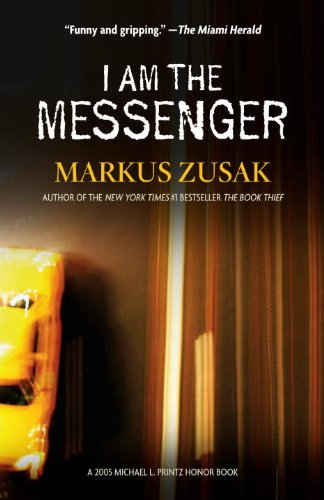 "I Am The Messenger" is a book about mystery, friends, and the social life of an accidental hero. Ed Kennedy, a big-city cab driver, has been chosen by an unknown source to save people from their trapped life. Different victims create a different puzzle for Ed to figure out. From a lonely woman to a runner who needs bare feet, Ed finds what is missing from their life and seals that gap. He creates good by doing the bad.

In between each task he receives, Ed plays a nightly game of poker at his best friend Marv's house. Ed's four friends, Marv, Audrey, Ritchie, and the Doorman (Ed's dog), support Ed to their fullest extent. Audrey, Ed's shoulder to cry on, is also Ed not-so-secret crush. Marv, Ed's drinking buddy, lives with his parents and never spends a cent of his money. Ritchie, Ed's silent friend, has a tattoo of Jimi Hendrix that looks like Richard Pryor. Then there is the Doorman. Doorman is Ed's pride and joy. The Doorman is a coffee-drinking, smelly, overweight dog. Throughout this novel, Ed discovers that he can be a silent hero, he fixes what others turn away from.

My take: 3 looks
After reading Zusak's The Book Thief, I clamored to get this one. It was no "Book Thief", but it was an interesting and engaging story. The harshness of poverty-riddled, modern-day life in Australia was apparent in the language and descriptions of familial relationships. I was tempted to feel that the harshness was manufactured somewhat, but as I got to know these characters and their environment, I agree with the style and the reasons for Zusak using this literary tool.

The story is an intriguing one, with one character receiving "messages" on how to make a strong and lasting change in someone's life. Changes that seem to be small and without much cost or effort on the part of the protagonist. As expected, the "messenger" changes and grows with each person/family he helps.

We find in the end who the instigator is, and I was torn as I neared the finale as to whether or not I wanted to know. It would have been fitting for this person to remain anonymous, I think. The statement that I cannot easily dismiss or understand is that the man behind all of this "instructed that man to brutalize his wife." Why would he do that? Just to make a point? Was the man abusive already? Was money exchanged? Out of all of the situations, he merely acted on what was already in play. In this case, however, he caused the action, and I am not sure I can forgive that; especially since a child was witness. This revelation almost ruins the book for me. How on earth can someone who wants to right wrongs himself instigate a wrong simply to enable it to be rectified. There must be more to the story that was either edited out, or that I missed. In any event, this heinous sentence demonized the otherwise altruistic man, and turns this into something I don't think Zusak intended.

Overall, I recommend.
Posted by Carmen, Queen of Stone's Throw at 10:00 AM