Today in Literary History: The Old Man and the Sea 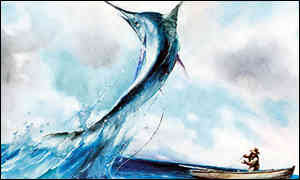 On this day in 1952, Ernest Hemingway finished his novella "The Old Man and the Sea". At only 127 pages, it won the Pulitzer Prize in 1954, with the following citation: "for his mastery of the art of narrative, most recently demonstrated in The Old Man and the Sea, and for the influence that he has exerted on contemporary style."

The story summary:
The old man of the novella’s title, Santiago is a Cuban fisherman who has had an extended run of bad luck. Despite his expertise, he has been unable to catch a fish for eighty-four days. He is humble, yet exhibits a justified pride in his abilities. His knowledge of the sea and its creatures, and of his craft, is unparalleled and helps him preserve a sense of hope regardless of circumstance. Throughout his life, Santiago has been presented with contests to test his strength and endurance. The marlin with which he struggles for three days represents his greatest challenge.

Many see this as a parallel to Hemingway's life. Before this publication, he had never reached the level of fame other expats in his social circle had achieved. I am sure it was difficult to dine with the like of F. Scott Fitzgerald and Ezra Pound when you share their profession. His marriages seemed to garner more interest than his writing. Until this one, that is.

Unfortunately, this would be Hemingway's last work before committing suicide, as his father before him, with a self-inflicted gunshot wound. As one reviewer states: It is about dreams fulfilled but at a cost. It is about a man's struggle with adversity. So close to reality.

This work was put to the screen twice, once with the main character played by Spencer Tracy; the other by Anthony Quinn. To honor Ernest Hemingway today, I think I will read this book.