Creepy Book of the Day: Love You Forever by Robert Munsch A young woman holds her newborn son and looks at him lovingly. Softly she sings to him: "I'll love you forever. I'll like you for always. As long as I'm living, My baby you'll be" So begins the story that has touched the hearts of millions of Americans. Since publication in 1986, "Love You Forever" has sold more than 15 million copies in paperback and the regular hardcover edition (as well as hundreds of thousands of copies in Spanish and French).

My take:
I am going to lose some of you here. This book seems to be very polarizing, and I am on the "this book is hella creepy" end of it.

First, the mother holds her son as an infant. She holds him as all mothers do, in a rocker, gazing lovingly down as he sleeps in her arms.

It is a beautiful illustration and reminds mothers of all ages what it was like to be totally in love with your newborn.

That's when it starts to get weird.

Mom has an unnatural attachment to her child. She creeps in at night, evidently on her hands and knees, and peeks at him sleeping.

She gets him out of bed while he is asleep so she can hold him. Who knows what time it is. It may be 3am. She just feels that she needs to hold him. She probably can't sleep because he is too far away from her if she is in her bedroom and he is in his.

He grows into the typical teenager, but you can see from this illustration that he probably needed to have his tail beat a little more often. If my teenage boy walked through the house at this age, leaving a wake of grime and dirt behind him, you had better believe that baseball glove in his hand would be replaced with a mop and dishcloth. 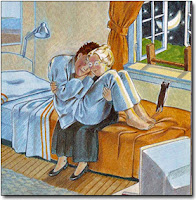 The boy finally gets his mama's breast out of his mouth and moves out. By the looks of the mother, this "boy" must be in his 40s. What does the mom do? Drives through town with a freaking ladder on the roof of her car. When she gets to his apartment, she puts the ladder outside his bedroom window,  because of course, it's the middle of the night, and climbs through the window so she can pick him up and rock him as he sleeps.

This poor woman is insane. As you can see from the picture, even the cat is trying to escape. And he must be medicated, because he is not waking up. And does she have on a dress? She climbed a ladder in a dress and Sunday shoes? Man, oh man.

Mom eventually (and thankfully) gets old enough that she can no longer follow him and cradle him creepily in the middle of the night, so the son cradles her. What gives? This is a seriously codependent relationship. And where is her husband? He either left her craziness, or she killed him in his sleep.

I vote for the latter.

And the cycle continues...as the man-child now looks down at his poor, unsuspecting child.

The sequel could be called "I Love You to Death".
Posted by Carmen, Queen of Stone's Throw at 10:08 AM