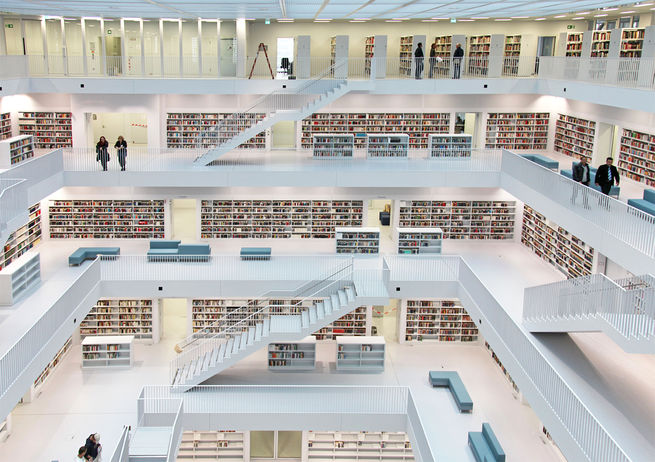 The sense of homogeneity generated by the facade with its nine-by-nine grid pattern is also reflected in the building’s “heart”: a 3,000 cubic metre space which, apart from a small water feature at the bottom, is entirely empty and is designed to allow visitors to forget the hustle and bustle of the world outside. Above the heart is located the light, funnel-shaped gallery room with its collection of quality literature, where the books literally blend into the architecture. Library users of migrant origin will find not only German books here, but also fiction in 25 different languages.

Taipei Public Library in Beitou, Taiwan
It's what is on the outside of this library that counts. The Beitou branch of the Taipei Public Library system was the first building in Taiwan to receive the highest EEWH rating possible—the diamond rating—making it the most eco-conscious building in the country. Built with wood from sustainably managed forests, the library also uses photovoltaic cells to generate power, has an insulating 20-centimeter layer of soil on the roof, and uses collected rainwater to flush the toilets. And books. They also have books.

The monastery library preserves the second largest collection of early codices and manuscripts in the world, outnumbered only by the Vatican Library. It contains Greek, Arabic, Armenian, Coptic, Hebrew, Georgian, and Aramaic texts.

The oldest continually operated library in the world, St. Catherine's Monastery has been around since it was first built by the order of Byzantine Emperor Justinian I, sometime around 564 AD. It currently holds over 3,000 religious and educational manuscripts and approximately 8,000 printed books, including first editions of Homer and Plato. Built in 2005, the Picture Book Museum gave the preschoolers of Iwaki, Fukushima, a space to call their own. Turned off by the shhh-ing atmosphere of traditional libraries, the Picture Book Library's founder gave architect Tadao Ando free rein to create a space that would be inviting for children. His only order was to make sure the covers of the books were visible. The glass-walled and vibrant end result was celebrated as a new paradigm in educational spaces in Japan, and as an architectural masterpiece.

The library has been highlighted as one of the "25 Most Modern Libraries in the World".

A total of 6000 people visited the Picture Book Library in its first 10 months, often 200 on each public day and visitors have exclaimed of the building: “The museum is "architecture of light...the concrete feels so warm". Critics say "a tension-rich rhythm develops out brightly and darkly, from open and closed zones". "Like so many of his greatest buildings, it pulls off a remarkable illusion: the walls may be built from blocks of concrete, but, from the inside at least, the building feels as if its primary materials were light and air". "There is no dead end,” one blogger noted, and they were reminded of M. C. Escher

Royal Grammar School Chained Library in Guildford, England
Established in the early 1500s, the Royal Grammar School contains one of few remaining examples of the practice of chaining books to shelves. This allowed important or particularly useful books to be placed in communal areas for public perusal rather than locked away, paving the way for the public library system. Now the Headmaster's Study, the Chained Library holds books that date back to the late 1400s, including two early editions of Sir Isaac Newton's Principia.

McAllen Public Library in McAllen, Texas, USA
When the city of McAllen acquired an old retail property, they brought on Minneapolis-based architects Meyer, Scherer & Rockcastle, Ltd. to convert the space into a massive new public library that looks nothing like the Wal-Mart it once was. The largest single-story public library in the United States, the new McAllen Public Library now includes a massive children's area with one of the largest teen areas in the state, an art gallery, a 200-seat auditorium.

Bibliotheque Nationale in Paris, France
No expense was spared to carry out the library’s grand design, which many claimed defied logic. While books and historical documents are shelved in the sunny, 23-storey and 79m-high towers (shaped like half-open books), patrons sit in artificially lit basement halls built around a ‘forest courtyard’ of 140 50-year-old pines, trucked in from the countryside. The towers have since been fitted with a complex (and expensive) shutter system but the basement is prone to flooding from the Seine.
Posted by Carmen, Queen of Stone's Throw at 8:26 AM