The Great Santini by Pat Conroy 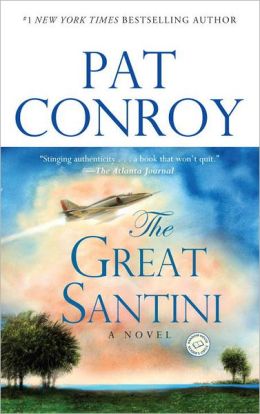 Summary:
The moving portrait of a son’s struggle to escape the iron fist of his volatile military father.

Marine Colonel Bull Meecham commands his home like a soldiers’ barracks. Cold and controlling but also loving, Bull has complicated relationships with each member of his family—in particular, his eldest son, Ben. Though he desperately seeks his father’s approval, Ben is determined to break out from the Colonel’s shadow. With guidance from teachers at his new school, he strives to find the courage to stand up to his father once and for all.

Inspired by Conroy’s own relationship with his father, The Great Santini is a captivating and unflinching portrayal of modern family life and a moving story of a son becoming a man.

This was a heartbreaking book to read. Knowing that it was based on Pat Conroy's own childhood made it that much more morose.

Bull Meechum is a mean man. He sets out to hurt others, and if he isn't successful doing it with words, he will do it physically. I kept looking for a redemption here. In books like this, where difficult relationships are portrayed, there is a moral, allegory, metaphor, something that the reader takes away with them at the last page. I searched and searched for such a quality in this one and could come up with only one thing: this was a purge for Conroy.

With that said, I despised this man. His antics at the beginning of the book with the cream of mushroom soup set up his maturity level, and everyone knows that a pubescent boy has no self-control. That is what Bull was mentally: a surly, spoiled, over-compensating teenager. To find abuse of new recruits a form of entertainment is sad enough, but to intentionally get your son drunk on his birthday over his objections, yell taunts at him during basketball games, and run "military exercises" in your home with a real sword is just over the top.

Likewise, I found the wife willfully weak and enabling. She was a strong Southern woman one minute, and lamenting to the verge of whining about what her life used to be, and what it had become. The excuses she made for her husband's bad behavior were infuriating and the fact that she didn't protect her children was inexcusable the next. I agonized over the children and the lasting effects the verbal and physical abuse would have on their lives.

The ending frustrated and annoyed me. I wanted Bull to live into old age, to become ineffectual and to see himself replaced with the next generation of Marine. Likewise, I wanted to see his children leave home and never look back. To have him die just after the prime of his life was beyond the pale for me, and robbed me of any redeeming value of the novel.

It is well written, and easy to read. However, feeling that this is merely a publishing of a document that Conroy's therapist may have had him write as part of therapy, I can't recommend it.
Posted by Carmen, Queen of Stone's Throw at 4:30 PM