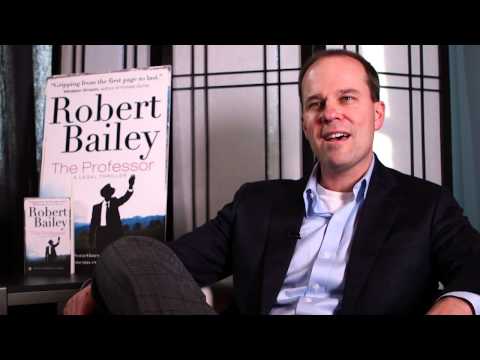 Amazon #1 Mystery author Robert Bailey, along with his wife Dixie, visited my book club recently to discuss his book "The Professor".

What a delightful couple! Here is his official biography:

Robert Bailey was born in Huntsville, Alabama, the son of a builder and a schoolteacher. From the time he could walk, he’s loved stories, especially those about Coach Paul “Bear” Bryant and his beloved Alabama Crimson Tide football team.

Robert obtained a Bachelor of Arts in History from Davidson College in North Carolina. Law School at the University of Alabama followed, where Robert made Law Review, competed on the school’s trial team and managed to watch every home football game. For the past thirteen years, he’s been a civil defense trial lawyer in his hometown of Huntsville. He’s married to the incomparable Dixie Bailey and they have two boys and a little girl.

When Robert’s not writing, practicing law or being a parent, he enjoys playing golf, watching Alabama football and coaching his sons’ little league baseball teams.

The Professor is his first novel.

Mr. Bailey was thoroughly engaging and altogether approachable. He was forthcoming while talking about the writing process, the intensity of editing, and gave his wife much credit in the process to get this book published.

I loved that he told the group that being a lawyer made him a better writer, and being a writer made him a better lawyer. The evening was full of little nuggets like that, including one where he said that he felt as if writing was like dreaming with your eyes open. How can you not love this?! He has just finished the first draft of the sequel to The Professor, titled "Between Black and White".

It was my first foray into becoming a FanGirl, and I must say that it suits me! Please see my review of "The Professor".
Posted by Carmen, Queen of Stone's Throw at 12:46 PM