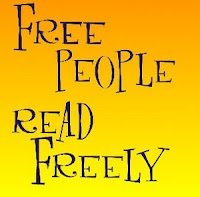 We received another mini challenge, this one is number six and the last, and it is the BEST! Here it is:
Mini Challenge #6: Read a book that has been banned.
Here's a website with a list of books that have been banned:
http://www.banned-books.com/bblist.html
or
http://classiclit.about.com/od/ladychatterleyslover/tp/aatp-ban.htm


If your book is not on these lists but you know that it is banned, you can still read and review it as long as you are able to prove that the book is banned!
*******************
All reviews must be submitted by August 29th in order to receive credit and the chance to get an extra entry to the raffle once the main challenge is completed.


NOTE!!! THIS IS THE LAST MINI CHALLENGE!
I am going to read Of Mice and Men by John Steinbeck. This book was banned in 2001 for this reason:

Banned for using offensive language, racism, violence, and being unsuited to age group. Banned in 2001! Can you even believe it? In America!
It was challenged as late as 2008:
Challenged at the Newton (IA) High School because of concerns about profanity and the portrayal of Jesus Christ. Newton High School has required students to read the book since at least the early 1980's. Retained in the Olathe (KS) 9th-grade curriculum despite a parent calling the novel a "worthless, profanity-riddled book" which is "derogatory towards African Americans, women, and the developmentally disabled."

Here are the Most Frequently Challenged Books of 2009-2010:
Be alert, America! There are those amoung us who wish we were all the same, just like them, and wish to take away our individualities. Even if you don't agree with it, you need to allow the display. It is what makes us FREE.

READ A BANNED BOOK!!
Posted by Carmen, Queen of Stone's Throw at 6:23 PM